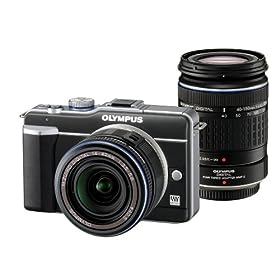 The new Olympus PEN E-PL1 hybrid DSLR camera is now available on Amazon for $599.99.  This Olympus E-PL1 camera features interchange-able 4/3 lenses, 720P HD video shooting at 30fps, and probably would be a great digital camera for those of you who don’t want a full-fledged DSLR camera but tired of using point-and-shoot cameras.  Also, you might want to wait around until Samsung NX10 becomes available, although pricing should be higher than the Olympus.

If you want to have even more options, the MMF-2 Four Thirds System Lens Adapter makes the E-PL1 compatible with all Olympus Zuiko Digital Specific lenses and other Four Thirds System lenses from Sigma, Panasonic and Leica. Olympus OM film-based lenses can be attached to the E-PL1 with the MF-2 OM Lens Adapter, and there are third-party adapters developed for lenses from most other manufacturers.

The Olympus PEN E-PL1 is probably the best value for point-and-shoot camera plus the ability to change lenses.  I for one have used point-and-shoot cameras for years and have been disappointed by the fact that you can’t really do great macro-photography or control the depth of the field.  This camera proves to solve those problems and I wish they had these available before I got my hands on my Canon EOS 7D, although my Canon 7D does terrific 1080P HD, costs way more.

Check out the preview of the Olympus E-PL1 done by CNet team:

Also read the best reviews of Olympus E-PL1 I found online so far:

DSLR Hack – How to Make a Cheap Image Stabilizing Device for your DSLR Camera!