As an avid motorcyclist, I don’t really worry about my gas too much as it gets as much as or better than most hybrid cars at 55MPG+, but this inventor decided to make motorcycles even more efficient by focusing on aero-dynamics.  Based on his studies, 90% of drag at 55MPH is caused by air, not your wheels.  So the above design was born, which gets 214MPG going 55MPH!

Now, I don’t see how I could ride that thing and look cool but I guess the point is about going far here.  That’s 214 miles per gallon!  If I took a trip from San Francisco to Lake Tahoe (which is about 300 miles), that means I just need about 1.5 gallons.  At current price of about $3/gallon, it will cost me $4.50 for a one-way trip.  WOW!

Talk about efficiency, we need all the motor companies talking to this guy, ALREADY!  Let’s begin the new age of more efficient cars/bikes with zero drag!

If you start tot think about it you will see much more potential to make aerodynamic improvements on a motor bike as on a car or a bicycle.

The cyclist lacks the power to reach a cruising speed where almost all resistance he meets is induced by aerodynamic drag.

The average motorbike though is relatively light and has a very bad aerodynamic shape, at 55mph 90% of all resistance is due to aerodynamic drag and only 10% to rolling resistance. Reducing air resistance on a motorbike is very effective. 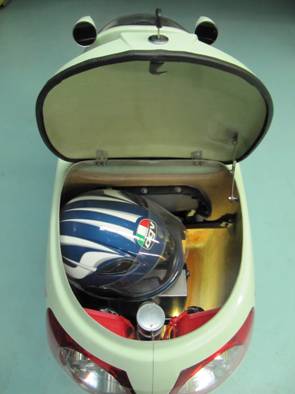